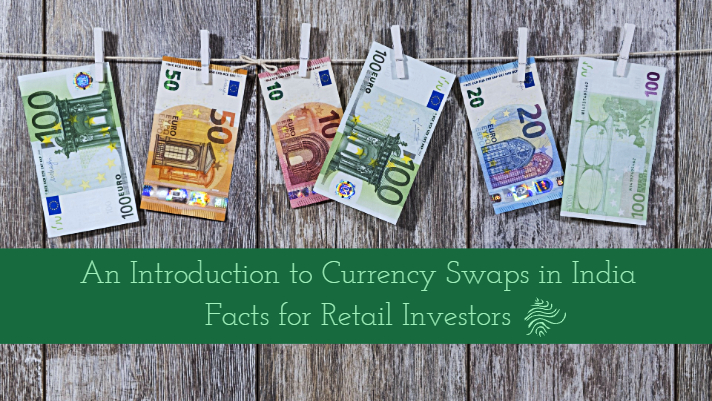 Also known as cross-currency swaps, currency swapping are a vital financial instrument for any multinational corporation or institutional investor planning to invest in an international business venture. While you may find them to be very similar to other financial derivatives like interest rate swaps and equity swaps, there are some fundamental qualities that make currency swapping different and comparatively more complex in nature.

Before we delve further into the subject, let’s first understand what currency swaps are, and how currency swapping functions.

What are currency swaps?

Currency swaps, in simple terms, are a legal contract between two parties who agree to exchange principal amount and interest in one currency for principal amount and interest in another currency. This exchange of cash flow takes place at a fixed date and a predetermined exchange rate (either floating rate or fixed rate) throughout the contract. For accounting purpose, any currency swap is just like a foreign exchange transaction. So it does not have to be put on a company’s balance sheet by law.

Many global banks operate as the middlemen in such currency swap deals. But the facilitators can also be companies that want to hedge against their global exposure, especially when it comes to foreign exchange risk.

The exchange of liabilities in currency swaps happen in three stages.

At the beginning of a currency swap, the counterparties exchange a principal amount of money at an agreed rate of exchange. The rate is usually based on the spot exchange rate. Alternatively, counterparties can use a forward rate. However, such forward rates need to be set before the swap initiation date.

The initial exchange can be either on a physical or notional basis. Its main purpose is to establish a quantum of the principal amounts to calculate both the continuing payment of interest and the re-exchangeable principal amounts at the end of the swap.

Once the initial principal amounts establish, the counterparties then proceed to exchange interest payments. Such payments are based on the respective fixed or floating interest rates agreed upon at the beginning of the transaction.

This initiates a series of forwarding foreign exchange contracts that take place throughout the term of the swap contract.

Re-exchange of principal on maturity

When the contract matures, both the parties re-exchange the principal amounts that were decided at the outset. This three-step process is the standard practice for currency swaps in the market.

With this straight forward approach, it is easy to effectively turn a debt raised in one currency into a fully-hedged liability in another currency.

During currency swaps, the principal amount is exchanged in one of the many ways:

There are basically two types of currency swaps, namely,

In fixed-for-fixed currency swaps, the counterparties taking loans agree to exchange currencies and pay each other a fixed interest rate on the decided principal amount. In such transactions, swapping the actual principal is not mandatory.

In the world of finance, engaging in currency swaps means acquiring additional financial flexibility. It helps enterprises that are investing in growing markets reduce their exposure to currency fluctuations. Currency swaps allow re-domination of loans from one currency to another, making it possible for foreign companies to invest at lower risk in domestic markets.

Currency swaps prove to be extremely advantageous in situations where both parties stand to gain in the market. Usually, the domestic company is able to locally obtain finance at better terms as compared to foreign companies. For big corporations, currency swaps present an opportunity of raising funds in one currency while saving money in another.

The best thing about cross-currency deals is that the risk is very minimal. In addition to that, swaps make transactions fairly easy for companies, as they are very liquid. This gives both parties the freedom to settle the agreement at any time during the contract period. Counterparties can also do an early termination of a swap deal through negotiation.

Lastly, currency swaps allow differences in the interest rates of two currencies through periodic payments, instead of the lump sum showed by forwarding points used in the forex market. This lets swaps to be customized as per the requirements of counterparties and at very attractive rates.

Example of a cross-currency swap

Cross-currency swaps initially started as a means to get around exchange controls and rigid governmental limitations on currency transactions. However, things changed, and today currency swaps are used as a tool to hedge against foreign exchange fluctuations. By using currency swaps, entities can reduce their interest rate exposure and obtained cheaper debt, resulting in low financial risk.

For example, suppose a US-based company named ‘A’ wants to expand its business in India. Similarly, an India-based company called ‘B’ wishes to enter the US market. One significant financial challenge that both companies will face is the unwillingness of domestic banks to extend loans to international corporations. In such a situation, both parties are likely to be offered loans with a high-interest rate.

If the amount of loan that both companies require are similar, then they can decide on an agreement that will benefit them both. Company A can borrow money from a US bank, while company B can borrow money from an Indian bank. Both the companies will then swap their loans and pay each other’s interest.  If there is a difference in interest rates between both the companies, they can figure out an alternative that will represent their credit obligation.

An alternative way of currency swaps

Another way for companies to make currency swaps is by issuing bonds at the underlying rates. These bonds will then be delivered to a swap bank which will swap them to each other. Suppose both companies have each other’s assets. Here, interest from the first company (i.e., company A) will be delivered to company B with the help of the swap bank. Similarly, interest from company B will be passed through to company A from the same swap bank. On the maturity date, each company will pay the principal amount to the swap bank and receive the original principal in return.

In both cases, the companies will be able to obtain foreign currency at their desired, cheaper rates, while efficiently circumventing foreign exchange risk.

How do we calculate the currency swaps? Here’s an example of it.

ABC is a German subsidiary of an American firm ABC. The company ABC generates income in Euros and need to send a part of that income to its parent company at the end of every year.  Instead of entering in multiple forward contracts to manage currency risk, ABC signs a swap agreement with XYZ, an American subsidiary of a German company XYZ. The company ABC will then be able to send the dollar cash flows it receives from XYZ to its parent company ABC and vice versa.

Let’s assume that ABC wants to swap €1,000,000 over five years period and agrees to make annual interest payments at a fixed rate of 6.00%. In return, ABC agrees to receive an equivalent dollar amount over the five periods at a fixed rate of 4.5%. The rate of exchange at the time of the agreement is $1.40/€.

Since currency swaps are structured as debts, therefore the annual interest payment for abc is

The final payment will be interest payment + the principal amount

Since the exchange rate is $1.40/€, the equivalent dollar principal

Hence, the annual interest will be

The final receipt of ABC will be Interest payment + principal payment

For simplicity, we have left out the financial intermediary. In reality, a bank acting as a swap dealer would be involved.

In a recent venture in 2018, India signed a currency swap agreement with Japan. It was made at the exchange rates prevailing during the time of the currency swap. Currently, India has an arrangement with nearly 25 countries to trade in their respective local currencies. This helps avoid dealing in third currency like EURO, USD, and JPY, resulting in reduced risk of volatility of exchange risk with a pre-decided exchange rate.

Next in the series of currency swaps in India, is its relevance for Indian retail investors. So here is another blog article covering details on the impact of currency swaps on exchange rate determination in India.

Send Enquiry
Open chat
RMoney India
Welcome to RMoney
More Info visit at https://rmoneyindia.com/research-blog-traders/currency-swaps-india
How May I Help You?